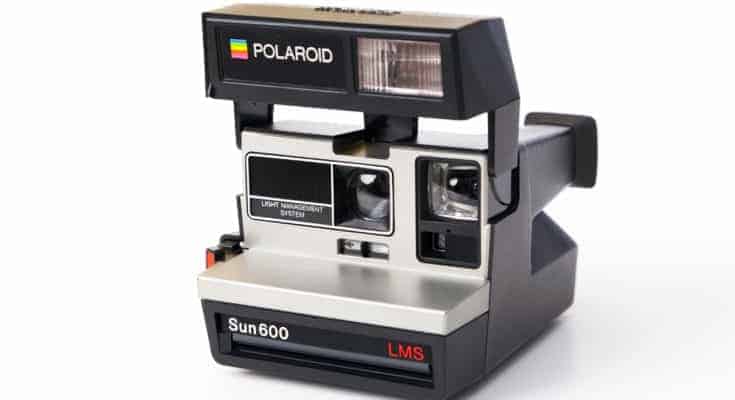 The Sun 600 Polaroid camera was not my first camera, but it is the most memorable. My earliest camera memories are of mother’s Kodak Instamatic. It was a small rectangular box, and what I remember most was the flash bulbs you had to buy separate. They snapped into the top of the camera, and they were good for about four uses. So, misfires were never good. I believe it turned (or you had to rotate it after each picture). My mother carried that thing to every family event. I guess I can credit my mother for my love of photography. She has moved to digital now, but you can still find her at every family function snapping away.

I don’t remember how old I was when I got my first camera, but I remember it was a Kodak. It was a slimmed down version of the model that my mother had. If I recall, she also upgraded to this model. It was about the size of a TV remote control, and this one had a built-in flash. Now the only thing you had to worry about was under/overexposures, which you weren’t sure you had until you took the pictures to get developed. After putting the roll of film in the envelope, I remember the anticipation of getting the pictures back. It was a waiting game. Now everything is immediate.

Polaroid had a fix for that, the instant camera. You snapped the picture; it “rolled” out of the camera and you waited for the picture to develop – in minutes instead of days. I believe my next camera was Sun 600 Polaroid camera. You paid for the convenience of instant pictures. The film was a little pricy – even more because I didn’t have a job at that time. Unlike the regular rolls of film with 24/36 exposures – I believe you only got 12 pictures. So, I was very selective of the pictures I took (or didn’t take). Imagine the feeling of waiting for the picture to develop, only to see that somebody in the picture moved – or there was too much/or not enough light.

After a few years, I retired my Polaroid. Having the instant access was great, but it ‘hurt’ to see all the money wasted on pictures that didn’t turn out. I went back to regular film – only I started using the disposable cameras. It was a cardboard box that looked like the film box, only it had a lens, a shutter button, and the film advance dial. Some of them even had built-in flash. Use it once, put the whole thing in the processing envelop, and you get your pictures. It was a lot simpler and a little cheaper than owning a camera. I took one to Germany with me. I had one of my coworkers take a picture of me standing near Heidelberg Castle. When I got the pictures developed – the picture was black!

I’ve owned a “few’ more cameras after my disposable phase – all digital since then. Before graduating to the DSLR, I had an Olympus C700, a Canon Powershot, and few other random cameras. But, my entry into the DSLR wasn’t very smooth. It resulted in my Camera Horror Stories.